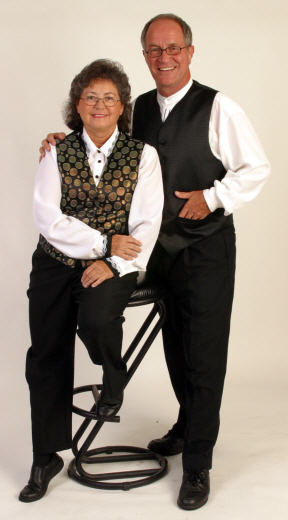 Biographical Information for
Still Having a Ball

On February 7, 2004 Terry and Kaye Kimpling performed at the Virginia Theater in Champaign, Illinois on the same stage as
Ann Margret . . . Yes, really (See details below)

The Kimplings have been married for over 52 years and began juggling together about 34 years ago. What started out as a hobby quickly grew to the point that they literally traveled the world in pursuit of performance skills. They have traveled to Montreal, Canada; Verona, Italy; Tbilisi, Soviet Georgia; and Christchurch, New Zealand to attend juggling conventions. Through these experiences, attending mime, and acting schools (and lots of work) they gained the skills necessary to entertain kids aged 3 to 103.

Whether on stage or strolling, the Kimplings presented a variety of circus arts, magical skills and just plain fun using an assortment of props that delight all ages. They have taught numerous juggling skills at the International Juggler's Convention for over 10 years and served as the Education Directors for 3 years.

The Kimplings performed at company picnics, festivals, library reading programs, and school assemblies. They appeared for 4 straight years at First Night in Evansville, IN. After 4 years in the entertainment business, between October 21 and December 22, 2002 Kaye and Terry Kimpling toured the Northwest United States performing their juggling show "Still Having a Ball" for National School Assemblies. They performed 67 times in seven states (Montana, Idaho, Illinois, Utah, South Dakota, Oregon, Nevada) for over 20,000 people. Terry was excited to perform in Terry, MT until he realized that the town was NOT named after him. They performed in schools (pre-school through high school), job corps, special education schools, on Indian reservations, and at a school for the deaf and blind.

In December 2003 they toured for the second time with National School Assemblies in New Mexico and Arizona receiving excellent ratings.